Josh Hendrick has been pioneering advancement at GP Reeves for years. Since his first day, he has exemplified servant-leadership with his radical kindness, constant encouragement, and willingness to go the extra mile. GP Reeves has been lucky to evolve alongside such a devoted employee and can’t wait to witness Josh’s continued accomplishments.

As he mentioned in the video, Josh has excelled in a multitude of positions at GP Reeves, from assembler to engineer, and just about everything in between. Today, Josh works as the Manufacturing Lead and oversees a majority of the GP Reeves assembly team while also managing the company’s project scheduling. He’s known as the GP Reeves Encyclopedia around the shop for his unending knowledge of GP Reeves products and processes – but this knowledge wasn’t gained overnight.

Josh had just completed an AutoCAD course at his local community college when he realized his passion for engineering and the possibilities provided by the software coursework. Unfortunately, his determination to continue learning AutoCAD was combatted with a lack of college options and course availability. Josh was disappointed that there weren’t many programs for what he was interested in, but a friend alerted him about a neat opportunity to learn more about the field at an up-and-coming dispensing business. Josh jumped on the opportunity and joined the GP Reeves family in late January 1995 with an optimistic mindset and a strong eagerness to learn as much as possible. 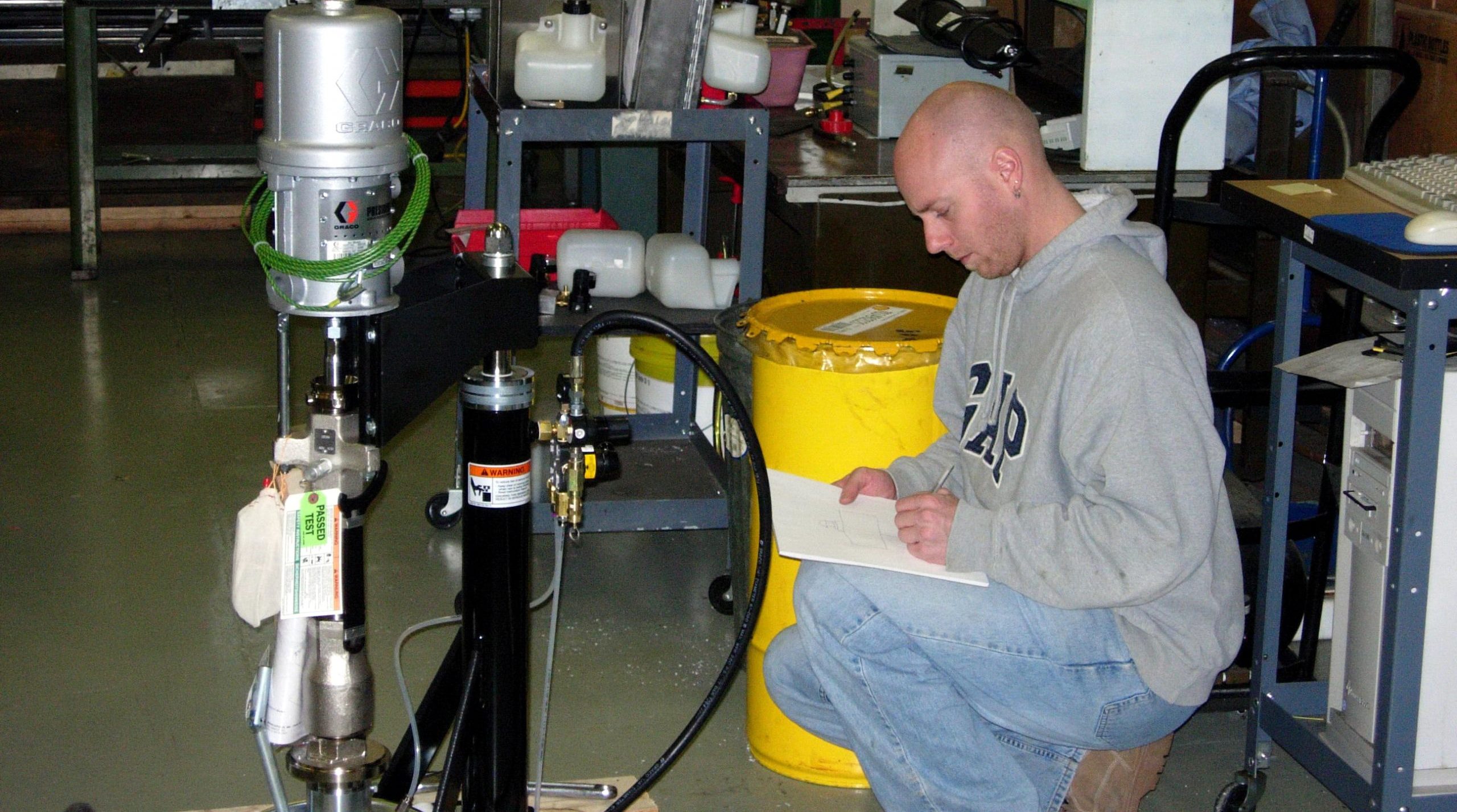 At the beginning, Josh felt like a rookie and was struggling as the stereotypical new guy. Fairly quickly, however, he was taken under the wings of those around him and was exposed to the ins and outs of the dispensing industry. Because the company was still small when Josh joined, it was easy for him to get plenty of attention and training. This made it so that it didn’t take long to feel a part of the team. This era was just the beginning for Josh’s growth and development with the company.

“The sky is the limit! There are still so many untouched industries and new innovations to impact with our unique [dispensing] systems” 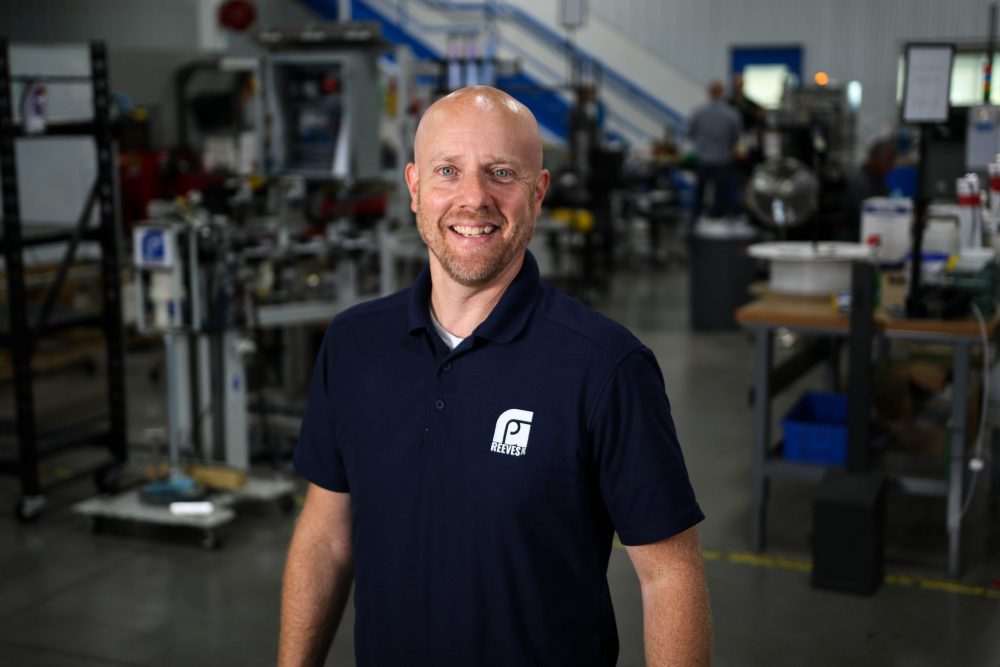 As Josh continued to develop as an employee and as a leader, so did GP Reeves. The dispensing industry and the equipment involved continued to advance. Brand new ways of dispensing a wider variety of materials were getting explored and Josh was thrilled to take part in such innovation. From its beginnings in conveyor lubricators to its gradual expansion into fully customized dispense systems, Josh was assisting GP Reeves with the development of top-notch solutions for a vast array of industries.

Josh displayed a constant enthusiasm toward the new challenges and possibilities that came with each workday. GP Reeves had gradually become a strong global leader in the realm of material dispensing and had inaugurated itself as an established solutions-provider for a myriad of different industrial components. The once small company evolved its dispensing technology to accommodate all types of materials. As this occurred, Josh continued to grow with the company and began to lead his own team. He became the epitome of a role model for many of the employees at GP Reeves. With his humility, quiet-strength, and relentless dedication to learning, Josh became well known as a core member of the GP Reeves family. 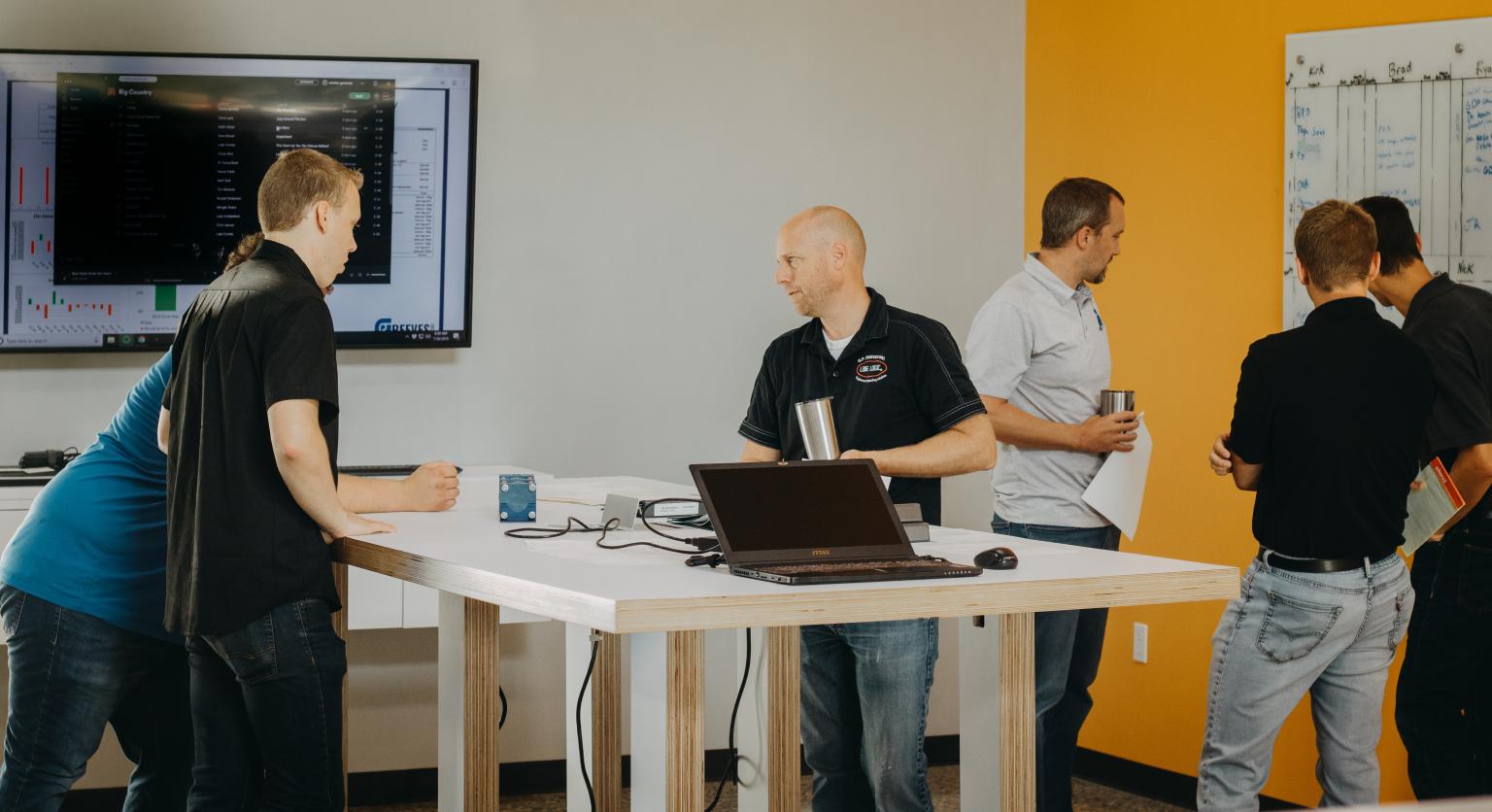 Josh’s favorite thing about GP Reeves has always been the company’s unlimited potential. When talking about the future of GP Reeves, Josh exclaimed, “The sky is the limit! There are still so many untouched industries and new innovations to impact with our unique systems”. As the company continues to evolve and foster advancement in new markets, Josh will remain an integral part of our GP Reeves family. Our entire team looks forward to continued teamwork with Josh and can’t wait to see the great things he accomplishes next!

What do you see as GP Reeves biggest strengths?

Our ability to put customers first is definitely our top strength. We’re able to go above and beyond, unlike any competitor, to ensure customers get a customized solution that is perfect for their unique application. Our dedication to customers sets us apart!

What is your favorite product?

The AA dispensers are awesome! Their method of dispensing is really cool and it’s just an awesome patented technology!

What do you see on the horizon in the dispensing industry?

The industry has grown so much within the past few years. Something I really see taking off is machinery for different materials. We’re getting out of the traditional greases and oils and are exploring completely new methods of dispense. As the world continues to advance, so will its dispensing technology and material capabilities.

Want to learn more about our plans for innovating production dispensing?

Fill out the form below and we’ll follow up with you!